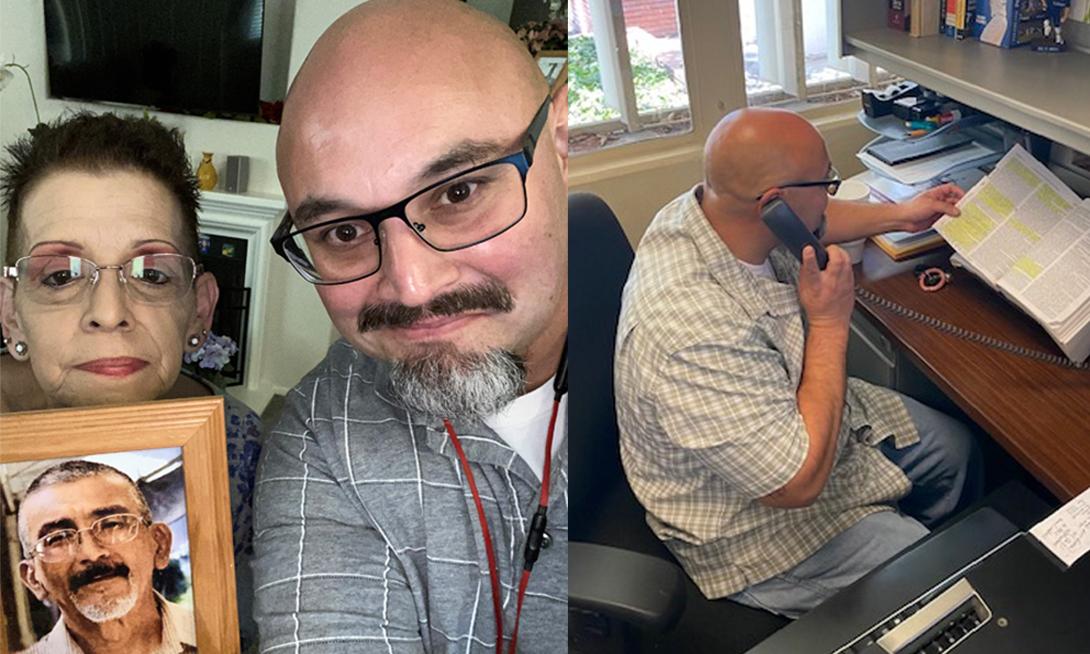 At the age of 22, Ruben Garcia was drafted into the United States Army, where he proudly served from April 03, 1971 to March 15, 1972. During his enlistment, Garcia served in the Vietnam War and was awarded the National Defense Medal, Vietnam Service Medal, Vietnam Campaign Medal w/60 device, and Overseas Bar for his service during the war’s phase VII counteroffensive.

During his time oversees, the United States government was utilizing a hazardous dioxin chemical known as Agent Orange. Years later, the U.S government finally admitted the deadly consequences of utilizing this Agent Orange. However, thousands of United States servicemembers who took part in the war effort had been exposed to the hazardous chemical which would compromise their immune systems.

In 2002, Garcia filled a claim for Type II Diabetes and Hepatitis C on VA form 21-4138 which is an official blank piece of paper within the Department of Veteran affairs. Within VA form 21-4138,  Garcia informed the VA that the two conditions were associated with his Vietnam service; however, the VA would only grant Type II Diabetes. Hepatitis C would be denied due to lack of supporting evidence that the disease was associated with Vietnam and military service. Due to the complex nature of the VA system and its law, Garcia gave up on his VA claim; however, maintained his argument that his medical condition was somehow related to his military service. On 11/01/2013 Garcia succumbed to his illnesses leaving only his verbal argument in the hands of his spouse Sylvia, a retired Los Angeles County Sheriff’s Personal Clerk.

Shortly after Garcia’s death in 2014, Mrs. Garcia attempted to apply for VA benefits on her own. Due to her lack of knowledge of VA rules and regulations, she only applied for VA burial benefits. The VA granted Mrs. Garcia a non-service-connected burial award in the amount of $1,034. The VA granted $300 for the veteran’s death and another $734 for the plot allowance. Moreover, the VA failed to inform the widow that she could apply for additional benefits such as death indemnity compensation or a basic widow’s pension which prevented Mrs. Garcia to express the concerns of her husband’s past arguments. Over the years, Mrs. Garcia felt something wasn’t right.

Three years later, Mrs. Garcia walked into the West Covina Courthouse without an appointment or notice. “Something pushed me to go into the office that day,” she said.

While in the office, Mrs. Garcia meet with Marine Corps Iraq War Veteran and Los Angeles County Veterans Claims Assistant II, Christopher J. Harris. During this time, Harris had filled a record 138 auditable claims and processed 304 non-audible forms for the month of August 2017.

“The end of the month is always a challenging for every Veteran Service Officer (VSO). All VSO’s in the country are trying to finish any pending claims they have, and trying to get their claims into the hands of the VA to protect the claimant’s early effective date. What makes it worse, summer is the time all state schools rely on their local Veteran’s Service Office to provide veteran dependents with letters waiving state school’s tuition. So yeah, Mrs. Garcia came into the office at the wrong time when it was really busy,” Harris said.

During this time, Mrs. Garcia wanted to know if she qualified for any other VA benefits, so Harris conducted an in-depth interview with Mrs. Garcia concerning her husband’s military service and cause of death.

“I remember Mrs. Garcia coming into the office with minimum paperwork. All she knew was the information her husband told her. In addition, this was during the time when the West Covina Office had limited resources to help study any past VA paperwork. During this time, the office didn’t have access to the VA’s data base, known as VBMS. I had to work off a VSO hotline that offered little information, the veterans death certificate, the veterans military discharge, the widow’s argument, and knowledge form past co-workers of how their appeals worked,” Harris said.

During the interview process, Harris screened Mrs. Garcia for two benefits: Death Indemnity Compensation and a basic widow’s pension. Due to the strict laws of a widow’s pension, Harris informed Mrs. Garcia that her best option would be Death Indemnity Compensation. The only challenge was proving Mr. Garcia’s death was related to his service-connected condition and military service.

“I relied on my training from my past co-workers. When I came onboard within the department, I had the unique experience of sitting with all senior Veterans Claims Assistant II to see how they operated within the community. During this time, I realized how passionate these employees were about helping the veteran community and none of them were afraid of the VA. Through their guidance and mentorship, I learned how to assemble a proper claim package and submit it to the VA,” Harris said.

“I know the law states a claim can be granted through disabilities that are proximately due to, or aggravated by, service-connected disease or injury; however, the problem is Mr. Garcia had passed away, making it harder to obtain a medical opinion. Another problem was that Mr. and Mrs. Garcia utilize Kaiser, where most doctors don’t provide a medical opinion. The only option was to assemble a perfect claim package with an argument on VA form 21-4138 stating there is a correlation.”

“I’ve helped a lot of Vietnam Veterans suffering from Type II diabetes. From my personal experience helping these veterans, I’ve learned a lot about Type II diabetes. A person’s entire immune system is compromised from the disease which people usually end up suffering other major issues. At the time, all I could do was help Mrs. Garcia with a written argument trying to associate Type II diabetes and Hepatis C together. At the time, we were helping a huge amount of people  in the office, and  so didn’t have the luxury of spending all day on the claim. I had to figure something out fast, so I created a one paragraph argument stating that the two conditions were related.” Sadly, the claim was submitted and denied due to lack of evidence.

But, rather than give up, Mrs. Garcia continued to talk to Harris about her rights as a claimant. The only advice Harris could do was to continue to fight with the VA by filling a timely appeal and maintaining the stance that diabetes and Type II Diabetes can be linked together.

In 2018, Harris assisted Mrs. Garcia with a Notice of Disagreement. Within the Notice of Disagreement, Harris maintained the widow’s argument by stating, “Please understand that Type II diabetes weakens the immune system, which caused [the veteran] to develop all conditions listed on his death certificate. There are numerous medical reports that liver disease is associated with diabetes….”

Again, the VA denied the Notice of Disagreement and maintained their reasoning of limited evidence. The only option left was to perfect the appeal and file a Form 9 to continue the appeal to the Board of Veteran Appeals.

“When submitting the appeal, I was hoping a law judge could express reasonable doubt and grant the claim,” Harris said.

In 2021, A BVA judge reviewed the appeal and liberally construed the appeal which also included the veterans past argument from 2002 stating his Hepatitis C was related to his military service. In addition, the VA law judge called Mrs. Garcia and CalVet employee, Michelle Richardson into a hearing to go over facts of the case and VA law. After the hearing, the law judge remanded the case back to the VA with specific instruction to the VA of how the appeal was to be handled. While going over the appeal, the BVA law judge was interested in the written arguments between Harris and Garcia. Moreover, the BVA law judge wanted to know if there was a correlation between Hepatis C, Type II diabetes, and the veterans cause of death. The BVA law judge also wanted another medical opinion concerning the veteran’s cause of death.

“Basically, the BVA law judge was focusing on the law that expresses proximately due to, or aggravated by, service-connected disease or injury,” Harris said.

Mrs. Garcia thought it was a mistake. “I wanted to return the money back to the bank saying the government made a mistake. I’m not trying to end up owing the government any money, but, then I read the bottom of the checks and realized this was form the VA. I couldn’t believe it.”

Shortly after, the VA sent Mrs. Garcia a notification letter stating her appeal was granted in her favor. During the remand process, the VA did everything as instructed by the BVA law judge. Moreover, the VA received a new medical opinion stating there is a correlation between Hepatis C, Type II diabetes, and the veterans cause of death. This was a huge win for the widow, the veteran community, and department.

The VA, with the help of the BVA law judge, granted three monetary benefits to the widow. The first benefits were all the money owed to the veteran when he was alive. Service-connected burial was the second monetary benefit granted to the widow, and the third benefit was Death Indemnity Compensation owed to the widow, all tax-free money. The widow will also receive a paycheck from the VA for the rest of her life. Additionally, the widow can now apply for more aid and attendance benefits, if she needs it.

Harris also reviewed the file and focused on the effective dates. “I wanted to see if Mrs. Garcia was owed more money due to the fact the VA granted her Death Indemnity Claim only going back to the year 2017. I reached out the only expert opinion I trust, which is Los Angeles District Manager Alberto Alpasan. Alberto provided me with a detailed timeline of when all paperwork was filled and received by the VA. I tried to make an argument that the VA made a duty to assist error; however, Alberto pointed out the widow didn’t file the proper paperwork in 2014. The widow could have been owed more money if she only talked to an experienced VSO in 2014.”

This large amount of money now adds to the $12,110,675.04 VSO Christopher Harris has personally secured from the VA. Moreover, the VA is now paying the veteran community $1,571,874.38 on a monthly basis and has already paid out $247,840.87 of lump sum benefits due to Harris efforts of proper advocacy within the veteran community.

“This is a huge win for the widow and my co-workers,” Harris said. “Hopefully, this shows the need for qualified VSO’s that are not afraid of the VA. Right now, VA benefits are under attack from the VA itself. The VA is trying to reduce monetary benefits which will have a hug impact within the veteran community.

A hot topic amongst all VSOs is the VA’s plan to reduce tinnitus and sleep apnea to a 0% rating if granted. This means the VA will acknowledge the disability if proven the conditions are service related; however, the VA will pay and monies which can have an economic impact within various counties. It’s going to come to a point where the community will need an experienced VSOs with skills to help navigate through the complex VA process to secure monetary benefits from the VA.”

Note: The widow has signed a consent form allowing the Los Angeles County Department of Military and Veteran Affairs to discuss all facts of the case to inform the community of the importance of proper VA compensating advocacy. For further comment regarding this authorization, please contact the Los Angeles County Department of Veterans Director or Deputy Director at 213-765-9680.