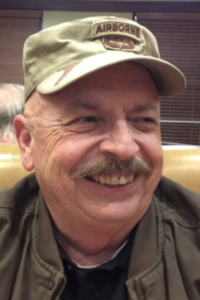 Dennis Anderson is an Army veteran who served in Cold War Europe at the end of the Vietnam War Era. He was a paratrooper with the 8th Infantry Division and served with the 3rd Squadron, 8th Cavalry, in surveillance of the Warsaw Pact border with East Germany. As a professional journalist, he deployed to Iraq as an embedded reporter with California National Guard. He worked on the UPI International Desk and Washington Bureau, and retired as Chief Editor of the Antelope Valley Press, then shifted careers to work in clinical counseling with veterans. He has a Master’s degree from the USC School of Social Work for veterans and military families and is a Licensed Clinical Social Worker.